Chilled in a Field Festival was born from the '90s/'00s London party scene and we are incredibly proud to have built a reputation for delivering top quality genre-spanning dance music. Here's our 2019 DJ lineup!
Dialog
There's few better suited to ease us gently into that festival feeling than Dialog>, who'll get proceedings off to a gentle start with his eclectic chilled vibes and cinematic soundscapes.

GTA
Girls Take Action is the UK's leading all-girl drum and bass crew that is dedicated to the spreading of the female voice in a predominantly male dominated scene. Under leadership of head-honcho Lady V-Dubz, GTA has grown massively from a vision in 2014 to an internationally recognised group in 2017. Performing in the woods at Chilled in a Field this year, make sure you don't miss them.
Jurrane
Enticed out of DJ retirement by meaty slabs of party funk and 70s disco, with brass stabs for days and basslines so fat they’re one Big Mac away from a Channel 4 documentary. Here’s a teaser: https://soundcloud.com/jurrane/thank-funk-for-summer-2019
KENI DJ
His progressive psy and house grooves will provide the perfect sound track for Friday night grooving in the woods.
Noisy Boysie
After a barnstorming festival debut in 2015, expect deliciously squelchy sounds and driving psy basslines as he turns it up in the woods on Friday night.
Rolo
Big galloping party-ready psytrance guaranteed to get us stomping.
The Ting
This absolute legend of the London and international hard dance scenes is coming out of retirement for Chilled in a Field to bring us a big set of classic hard house and hard dance.
The Chilled in A Field All Stars
Residents Custard, Tequila Slammer, One Trick Pony and Danger Pony for an end-of festival closing party to remember.  Make sure that you stay over on Sunday night to catch them! 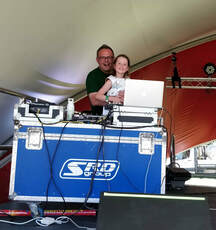 Rob Baggs
Our very own Music Coordinator will be kicking off proceedings on the main stage as he takes to the decks from 1pm on festival Friday.  He is likely to be joined on stage by the lovely Seren (his 7 year old daughter and biggest fan).  We asked for some marketing material to describe his set but all we got was 'I'll be playing some tunes. Innit".  Get yourselves there nice and early to catch them.  If you miss this one, pop by at 11am on Sunday and get another chance to catch some tunes.  Innnit.
To the tickets!